DESCRIPTION:
A gripping sequel to the bestselling novel What Girls Are Good For, following the real-life reporting of undercover journalist Nellie Bly!

Fresh from her escape from the madhouse on Blackwell's Island, undercover reporter Nellie Bly investigates the doctors who buy and sell babies in Victorian New York. Based on real events and her own reporting, this novelette follows Nellie Bly as she asks the devastating question - what becomes of babies? 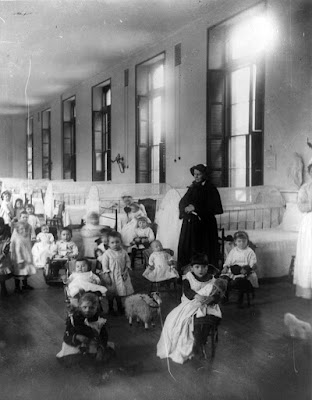 Bly is known for penning Ten Days in a Madhouse, but Charity Girl showcases the struggles she faced as an investigative columnist despite professional success. Bly made her name on Blackwell's Island, but fame didn’t open every door and didn’t guarantee either print space or final editorial approval of her submissions. I’ve no idea where Blixt intends to take this series, but I like the arc this novelette hints at and hope professional frustration plays a role in future installments.

Bly, however, isn’t the only strong woman Charity Girl has to offer. I delighted in Blixt’s complex portrait of Sister Irene and how he used her as a foil for Bly. The refined nuance of their interactions allows both to shine without sacrificing their individual integrity. Blixt's admiration for both women is unmistakable, but his recognition of the differences in their outlooks and experiences brings a unique note to the narrative.

Finally, I'd be remiss in failing to note Blixt’s research and the treasure trove of letters it uncovered. I can’t imagine how the author felt reading these documents for the first time, but I was profoundly touched by his decision to include them. Reading these accounts put me directly in Bly’s shoes and communicated the intensity of emotion that drove her investigative work. More than that, however, these letters gave a voice to a generation silenced by shame and circumstance, a demographic often marginalized and forgotten in the broader context of our nation's history.

Though written as a sequel novelette, Charity Girl packs a punch all its own. I read the books in order but feel this short can be just as readily appreciated as a standalone. Highly recommended and not to be missed.

at May 08, 2020
Email ThisBlogThis!Share to TwitterShare to FacebookShare to Pinterest
Labels: 1800s, Biographic Fiction