DESCRIPTION:
The New York Times bestselling author of The Rose Code returns with an unforgettable World War II tale of a quiet bookworm who becomes history's deadliest female sniper. Based on a true story.
In the snowbound city of Kiev, wry and bookish history student Mila Pavlichenko organizes her life around her library job and her young son--but Hitler's invasion of Russia sends her on a different path. Given a rifle and sent to join the fight, Mila must forge herself from studious girl to deadly sniper--a lethal hunter of Nazis known as Lady Death. When news of her three hundredth kill makes her a national heroine, Mila finds herself torn from the bloody battlefields of the eastern front and sent to America on a goodwill tour.
Still reeling from war wounds and devastated by loss, Mila finds herself isolated and lonely in the glittering world of Washington, DC--until an unexpected friendship with First Lady Eleanor Roosevelt and an even more unexpected connection with a silent fellow sniper offer the possibility of happiness. But when an old enemy from Mila's past joins forces with a deadly new foe lurking in the shadows, Lady Death finds herself battling her own demons and enemy bullets in the deadliest duel of her life.
Based on a true story, The Diamond Eye is a haunting novel of heroism born of desperation, of a mother who became a soldier, of a woman who found her place in the world and changed the course of history forever.

REVIEW:
The epigraph of THE DIAMOND EYE stopped my progress before I even hit the prologue. I was casually familiar with Lyudmila "Mila" Pavlichenko's history as a soldier and sniper but was utterly oblivious to the fact that she was also a single mother, a library researcher, and an envoy to the United States. The revelation took a minute to wrap my head around, but once it settled, I wondered how Quinn would balance all the facets of her subject's life. She's a master of the craft – one I'd follow into the gates of hell were she ever to turn her pen that direction – but this story was huge, and I couldn't begin to imagine how anyone would beat it into the framework of a historical novel.
The answer? A dual timeline set in both 1942 and 1937. My tastes favored the emotional depth of the latter, but I want to note the former grew on me as the novel progressed. Base knowledge of the players involved diffuses some of the suspense in that storyline, but I was still on the edge of my seat when the tension finally boiled over. I can only assume Quinn knew a creative twist necessary, that she had to offer something more to anyone who raised an eyebrow at the situational drama she'd created, but deliver she did. In truly sparkling fashion.
As a biographical novel, THE DIAMOND EYE naturally favors Mila's military career, but I loved that it never lost track of her humanity. Quinn's deft description of the role Mila played and the equipment she used fascinated me – especially when I took the time to compare her descriptions to the firearms in question – but it was the little nods to Mila's person that captured my imagination. Mila's gentle handling of Marya, her friendship with Vartanov, and her partnership with Kostia. The connection she fostered with Lyonya, her unfiltered maternal love for Slavak, her strained interactions with Alexei, and her dogged determination to submit her dissertation. All of it came together in a distinct and memorable portrait, one that pays fitting homage to a life worthy of recognition beyond the official tally in her service record.
I could go on, could gush my delight at Quinn's interpretation of Eleanor and FDR's marriage, my amusement at her nod to Teddy lost ring, or note the giggle that broke free at the Nina Markova reference she casually slid into the text – but the short of the matter is that THE DIAMOND EYE is worth tracking down. In a market flooded by stories of WWII, Quinn found untapped material and turned it into an impossible to put down page-turner. A novel that chronicles an extraordinary life and speaks to the fortitude required of all who serve on the front lines.
Rating: ★ ★ ★ ★ ★
Obtained from: Author
Read: October 20, 2021 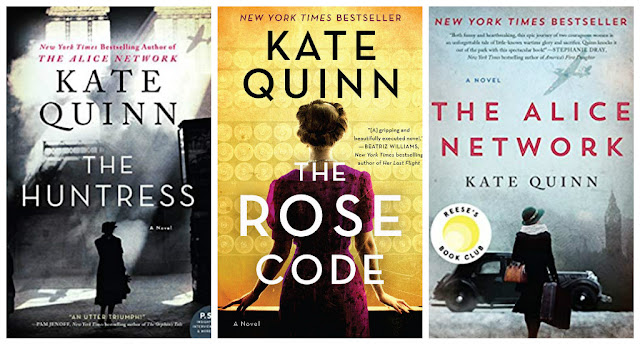